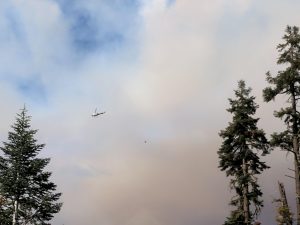 Rain fell on both blazes helping crews in managing the flames. The South Fork Fire, burning near the community of Wawona, climbed overnight by 375 acres totaling 6,100 while the containment held steady at 44 percent.  Most of the fire activity was on the north flank on Tuesday as the flame burned into heavy pockets of fuel, according to park fire officials. The south and west flanks are contained, but some smoke and fire glow at night is visible form Wawona due to logs and brush burning in the interior. Crews will continue to patrol and monitor the flanks closest to the community of Wawona and Mariposa Grove.

Road, trail and campground closures provided by park officials are listed below:

The lightning strike Empire Fire sparked about a 3/4 mile south of Glacier Point Road inched up in acreage by 25 acres for a total of 4,150 overnight, but saw a hike in containment from 40 to 55 percent. Thanks in part to fire management personnel implemented a firing operation on the south flank of the fire to tie in containment lines on the Deer Camp trail on Tuesday. Additionally, park officials indicate the fire growth was moderated due to lower temperatures, higher humidities and cloud cover. The same strategy will be used on three sides of the fire to also limit further smoke production in heavy fuels, according to fire officials. The west and northwest flanks of the fire are contained.

Glacier Point road is closed so tree felling and vegetation clearance can be conducted. Park officials are assessing conditions to determine when the road can be opened. Additional crews and engines have been called in to support that work.

An overall strategy for both fires is to steer fire deeper into the wilderness where there is sparse vegetation and natural granite barriers, which will slow spread and limit smoke production, which is expected to persist at least through the first part of September. Click here for air quality details.