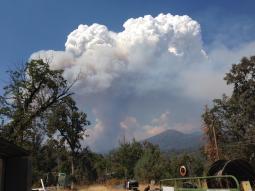 Update at 5 p.m.: The Railroad Fire burning in the Sierra National Forest west of Highway 41 has grown to 1,200 acres this afternoon but its containment remains at 5-percent. Seven structures have been destroyed and 100 remain threatened.  Fire officials have once again implemented a mandatory evacuation order for the community of Fish Camp.  Sugar Pine and Sugar Pine Camp were evacuated yesterday.  Forest fire officials have announced that there will be a public meeting with fire officials on hand to answer questions at the Oakhurst Community Center located at 39800 Fresno Flats Road in Oakhurst at 7 p.m. on Thursday.

The flames are posing a threat to Yosemite National Park and the stretch of Highway 41 that is closed has been expanded to north of Cedar Valley Drive to the South entrance to the park. Additionally, the highway’s southbound lane from Wawona to the South entrance of Yosemite has been shut down. Yosemite visitors are advised to use Highway 49 to Highway 140 or 120 for entrance to the National Park.

The fire is burning in steep terrain, with difficult access and heavy fuel loading, according to forest fire officials, who add that the potential for this fire is high. Fire activity this afternoon has increased due to high temperatures and stiff upward canyon winds. Forest spokesperson Alex Olow says that overnight strategy will be to man the containment lines and protect the communities threatened. What sparked the blaze remains under investigation.

This evening the Central Sierra Interagency Incident Management Team (Type 2), will take over the command of the fire from the Sierra NF.

The size estimate reduced from late yesterday due to more accurate overnight mapping. The fire, which poses a threat to Yosemite National Park, has resulted in a closure of Highway 41 that goes into the park. Guests staying at the Tenaya Lodge, who need to return to the hotel in order to retrieve their belongings, can meet at the Highway 41 road closure at 10am so that they can be escorted back. This is only for hotel guests. An evacuation order is in effect for the community of Sugar Pine and there is an evacuation advisory for Fish Camp. In addition, Yosemite officials have warned the community of Wawona that there is the potential for an evacuation warning in the days ahead. An evacuation shelter opened last night at the Yosemite Valley Visitor Center.

The fire is burning in steep terrain with heavy fuels. The fire potential remains very high. 350 firefighters are assigned to the incident this morning, including 26 engines, seven hand crews, two helicopters and three air tankers. The cause of the fire remains under investigation. It was first spotted at 1pm yesterday. Reduced wind speeds and lower temperatures helped fire crews make some progress last night, according to the forest service.