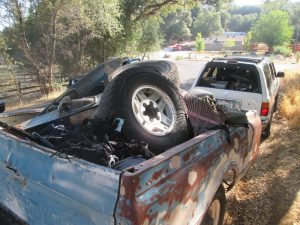 Sonora, CA — The Tuolumne County Sheriff’s Office reports that a homeowner made the right decision to report a suspicious circumstance to law enforcement officials.

The sheriff’s office received a call from a resident on Tinnin Court because there was a suspicious looking vehicle parked for an extended period with a man inside. The Sheriff’s Office responded and found a white SUV with an attached trailer pulling away from the address. The driver, 45-year-old Jason Peck of Sonora, was on probation through the Post Release Community Supervision program. Peck spoke to the deputy, but then attempted to drive away when the deputy wanted to conduct a search of the vehicle.

During a struggle with the deputy, Peck dropped two baggies on the ground that contained residue of methamphetamine. Eventually, Peck was taken into custody. The sheriff’s office adds, “During a search of the vehicle and trailer, two license plates were found and a records check determined Peck was not the registered owner. The license plates were collected so the registered owners can be contacted to verify whether or not they are stolen.”

Peck was booked into county jail for resisting and obstructing an officer.

The sheriff’s office reports that the concerned homeowner made the right decision to report the suspicious circumstance to law enforcement, noting that keeping a watchful eye on the neighborhood is the first step towards crime prevention.