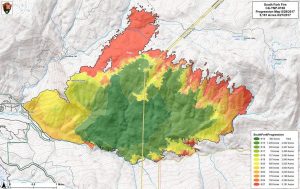 Sonora, CA – Wildfires already burning in the Yosemite Wilderness may be visible as firefighters continue to manage them for protection and resource objectives.

Of the two major ones, the South Fork Fire, which ignited near the community of Wawona on Aug. 13 is still reported as being 44 percent contained although the size has crept to 5,191 acres. While possibly lightning-caused, the official determination has yet to be made by fire officials. At last check 101 personnel and two helicopters were assigned to the incident.

Officials say that yesterday the fire was most active on the north and northeast flanks while the east flank is being slowed by natural barriers and sparse vegetation. Crews are continuing to patrol the flank nearest the community of Wawona and the Mariposa Grove with aircraft assisting in securing the line as needed. Repair and rehabilitation have begun within the Yosemite Wilderness. While smoke and poor air quality continue to be an issue in the park all roads within it remain open to travel.

The Empire Fire, which was induced by a lightning strike on July 31 is now at 2,770 acres. Two helicopters are also assigned to it, along with 35 personnel.

Yesterday, fire officials describe the most active portion of the fire as being on the east and southeast flank while the north end of the fire above Bridalveil Campground was relatively quiet. Currently they say the fire is holding as crews continue to monitor it. The spot near Glacier Point Road and Bridalveil Campground is secure and contained. Growth is expected today due to higher temperatures and relative humidities in the forecast.

The following areas are closed: Ostrander Trail; Bridalveil Creek Campground at the second junction with the Ostrander trail and from Westfall Meadow to the Turner junction, along Alder Creek; Bridalveil Trail to Turner Meadow Junction.

While Bridalveil Creek Campground is open today, visitors should check with Yosemite National Park Camp Ground Reservations for further information. Off trail areas are closed within the vicinity of the fire. It will be visible from the high country and may be seen from multiple viewpoints in the immediate area off Glacier Point Road, including Sentinel and Washburn Points. Travelers should be cautious of smoke along road and hikers should exercise extra caution.