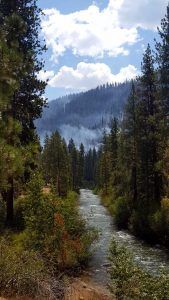 Forest spokesperson Diana Fredlund says, “ Last week’s thunderstorm activity led to numerous lightning strikes in the surrounding area causing several new small, mostly single-tree fires and an prompted an increase in fire personnel to monitor the blazes both by air and ground when firefighters could access the site.”  One of the fires is the Douglas Fire which is around 163 acres burning south of the Douglas picnic area on Highway 108, as earlier reported here.

Forest officials provided this update on the three fires:

Fredlund says fuels are expected to dry and become more flammable as temperatures heat up, followed by an expected minimal to moderate growth in fire activity and smoke in those areas. For  a map of all the lightning fires in the forsest,  click here Summit District Aug Lightning Fires map.

A special thanks to our community partner S.M.Neveau for sending in a photo.