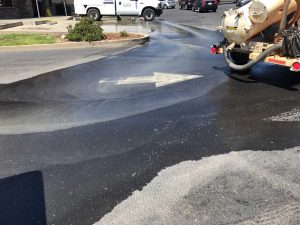 Update at 3:15 p.m.: Tuolumne Utilities District (TUD) spokesperson Lisa Westbrook reports the 2 inch pipe that broke has been fixed and water is being restored to all the impacted businesses. Crews worked for about two hours to repair the pipe, which Westbrook states, “It appears to be due to an old galvanized pipe that was installed in the mid-1980s. Unfortunately there are a lot of old pipes and infrastructure that do need replacing so this is just an example why we had that break in the first place.”

Update at 2:30 p.m.: Tuolumne Utilities District (TUD) spokesperson Lisa Westbrook reports a two inch service line is broken in  East Sonora along Mono Way.  She updates, “In order to make that repair to the pipeline and restore water, they’re actually going to have to turn off water to that service area which will affect some businesses…We are trying to get that repaired as quickly as possible. Hopefully it will be repaired in the next two hours.”

Those businesses include Sonora Sports and Fitness, Sonora Regional Medical Center – Bones Sports Medicine and Rehabilitation, Taco Bell, the Flyers gas station, Little Caesars Pizza and Safari Learning Academy. Further details on how some of the businesses are dealing with the break are below.

Update at 2 p.m.: The Safari Learning Academy is also being affected by the break. Assistant Manager Jodi Gate states that the facility will remain open until 6 p.m. However, they are recommending that parents pickup their children as soon as possible as there is no running water for hand washing or toilet flushing and currently they are using bottled water and hand sanitizer.  A Tuolumne Utilities District (TUD) crew is on site trying to fix the problem but  no estimated time of repair has been given by the utility. We have a call into TUD and are waiting for a response.

Original post at 13:10 p.m.: East Sonora, CA — A main pipe break is sending water gushing out onto the pavement and has closed the dining room of a nearby business.

East Sonora Taco Bell Manager Larry Bylard says that doors are closed to customers who want to come into the fast food restaurant due to rushing water but the drive-thru is still open to take orders. He adds that a Tuolumne Utilities District (TUD) crew is on site trying to fix the problem but he has been given no estimated time of repair.  Traffic is not impacted along Mono Way except for some drivers slowing down to see where the water is coming from and what TUD crews are doing. We’ll bring you more details as soon as they come into the newsroom.