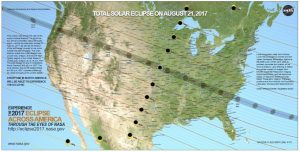 Sonora, CA – Sky gazers know the annual Perseid meteor shower now showing nightly is merely a warm up for one of the biggest celestial events this year coming on Monday.

A total solar eclipse that will be visible on Aug. 21 across the entire continental United States will get underway in the Mother Lode area early in the 9 a.m. hour.

While only folks living or swarming to view it in the 70-mile wide cross-country path of “totality” arcing between Oregon and South Carolina will be able to see the sun completely disappear behind the moon, locally we will be able to witness a partial eclipse with roughly a 76 percent obscuration – enough to enjoy a decent show.

Over the Sonora area the eclipse will begin to unfold Monday at 9:03 a.m. local time. By 10:19, it will peak at what scientists call the maximum eclipse and it will be over by 11:43. Over the course of about 100 minutes, 14 states will experience more than two minutes of darkness.

As viewing an eclipse with the naked eye or without taking proper precautions can cause irreparable eye damage, experts warn anyone planning to watch to take special precautions. While specially rated solar viewing glasses are recommended stores (locally the Sonora Lowe’s and Walmart, 7-Eleven in Twain Harte) that were listed as carrying them are mostly sold out. On Amazon.com, multi packages of paper-frame pairs were going for ten times over their regular price earlier this week. Regular sunglasses will not provide sufficient protection. Pinhole projectors are among the other ways to save your eyes. (Click into the image box slideshow for directions.) NASA shares its Eclipse 101 resources here. For viewing safety information, click here.

During the event, scientists will be recording numerous observations and images from space, air and ground resources, streaming many online – and later using them to study interactions between the sun, Earth and moon. NASA will provide a live online feed here.

Eclipses like this one, which can be viewed across such a large area are rare. Since 1503 only 15 total solar eclipse paths have crossed the one that will be seen Aug. 21. Come April 8, 2024, another one that will track northeast from Texas to Maine, will actually intersect the path of this one near Carbondale, Illinois, which many have dubbed at “Eclipse City. For that reason, more research will base in and around that area.

While just over 12 million people live within the Aug. 21 eclipse “totality” path, about 200 million people – slightly less than two-thirds of the national population — live within a day’s drive of it. From the Mother Lode, the closest major towns and city within the path include Corvallis, Albany and Lebanon, Oregon and Idaho Falls, Idaho. (To view the path, click into the image box slideshow).

For that reason federal and state officials have been coordinating and copiously warning would-be total eclipse area bound tourists for several months now to plan in advance; make sure vehicles are in good repair and gassed up; pack extra food, water, sunscreen and other supplies.

They also advise since this event is unprecedented in the number of folks planning to travel during the period to get to viewing spots a couple hours ahead of time; know where public bathrooms are; also be ready for a rush of traffic, crowds, “no vacancy” signs — and a host of other issues.

While thousands of viewing formal events and activities will be happening around where the total eclipse will be occurring, there appears to be only one set in the Mother Lode.

Slated to be staged from 9 a.m. until noon in Wawona at Yosemite National Park’s UC field station there, plans may well depend on firefighters’ progress in containing the nearby South Fork Fire, which broke out over the weekend. Current plans are to have portable telescopes to project the sun’s image and progression of the eclipse so the public may safely — and easily — watch.

Park officials indicate that individual eclipse glasses will be available on a first-come-first-served basis for $3 a pair. The event is free and open to the public. The UC Yosemite Field Station is located at 7799 Chilnualna Falls Road about 25 miles from Yosemite Valley; four miles from the South entrance to Yosemite National Park and five miles from the Giant Sequoia Grove.