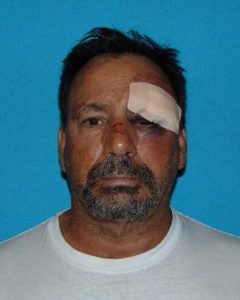 Columbia, CA — A dispute between neighbors ended with both being hauled off to jail but not at the same time.

A report of an assault taking place on Glory Gulch Road in Columbia on Monday night sent Tuolumne County Sheriff’s Deputies racing to the scene. They found 59-year-old Scott Sala bleeding from the head where he alleged 43-year-old James Smith II had hit him with a lead pipe just above his left eye. Smith was taken into custody for charges of assault with a deadly weapon and battery causing a major injury. Meanwhile, Sala headed to a local hospital to be treated for his head wound and was later released.

Several hours later in early hours of Tuesday morning, deputies were dispatched to the home for a second time for a report of gunfire and a man yelling for someone to come outside. This time they found Sala was the culprit and arrested him for making threats towards other neighbors, who had witnessed the earlier argument and now feared for their safety.

No firearm was found at the scene or on Sala who faces charges of threats with intent to terrorize. His bail was set at $20,000 and Smith’s is $50,000.