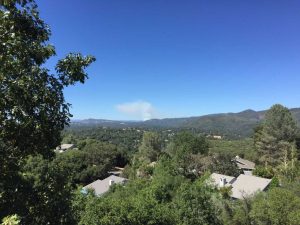 Columbia, CA — Crews are continuing to work towards fully extinguishing the Grant Fire burning in the Stanislaus National Forest, north of Columbia.

It ignited on Tuesday afternoon and it is 17.6 acres. The Forest Service says that the forward rate of spread has been stopped, and crews have successfully placed a hand line around the fire.  That said, it is still only considered 60-percent contained. Four engines and one crew remain assigned to the fire this morning. What ignited the blaze remains under investigation.

Spokesperson Diana Fredlund notes that while this incident is winding down, the Forest Service is preparing for the potential of a busy weekend. She adds, “The Forest has brought in nine extra engines, and other outside resources, for the holiday weekend. They will help us, and our cooperators, towards the goal of keeping any new fires small, and containing them quickly. Another reason for it is that we have some of our crews out supporting other fires, so they are coming in to help us.”

The Forest Service is hoping for a quiet Independence Day holiday when it comes to fire activity.