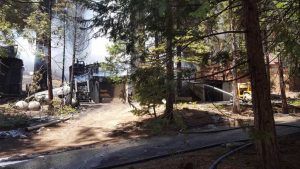 Pinecrest, CA — A man seen trespassing in a trailer at a campground makes statements linking him to the Thursday’s Pinecrest area cabin fires.

As reported here around noon yesterday, firefighters responded to the 100 block of Pinecrest Lake Road near Meadowview Road after the report of two cabins on fire; one was fully engulfed and the other had flames shooting out of the attic. Crews were able to keep the flames from spreading to vegetation and the fires were extinguished in about an hour.

Meanwhile, a little after 1 p.m., Tuolumne County Sheriff’s deputies were called to a Pinecrest area campground for reports of a suspicious man, wearing gloves on his feet, entering a trailer. Inside deputies discovered 52-year-old Jeffrey Best asleep in the camper and arrested him for trespassing.

During questioning Best made several statements related to the Pinecrest cabin fires. Tuolumne County Sherriff’s spokesperson Sgt. Andrea Benson indicates, “Based on his words, it is believed that Best carelessly lit a fire in a BBQ located in the garage of one of the homes. The investigation is ongoing and Fire personnel are investigating the evidence at the scene. It is believed both structures were damaged due to the actions of Best.”

Best was taken into custody for arson and trespassing.