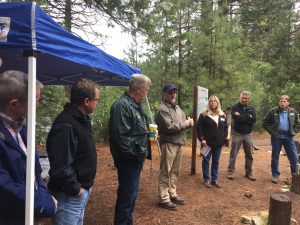 We reported earlier that the Sierra Nevada Conservancy allocated $496,000 to construct a fuel break that will increase the Tuolumne Main Canal’s resiliency in the event of a major wildfire. The canal consists of a series of historic wooden flumes and is the primary drinking water conveyance system for T.U.D. and 90-percent of its customers in Tuolumne County.

This morning leaders from a variety of partnering agencies gathered to get a preview of the thinning work that is just getting underway. It included brief speeches from T.U.D. General Manager Tom Haglund, Sierra Nevada Conservancy Area Representative Michael Pickard, PG&E regional manager Dave Meier and US Forest Service Fire Management Planner Carol Ewell. Other groups that have been involved include the California Conservation Corps., CAL Fire, Highway 108 Fire Safe Council, Yosemite Stanislaus Solutions Group, Sierra Pacific Industries and others.

With Lyons Reservoir as the backdrop, the leaders spoke about the importance of the project, and the hope that this could be the first of many additional efforts to collaboratively work towards improving forest health, and protecting infrastructure.

The group then walked over to view some of the early progress of the California Conservation Corps. in removing the overgrown brush and debris near Flume A.

T.U.D. Board Chair Ron Kopf told Clarke Broadcasting, “It is awesome to see these guys out here in the woods and starting to clear this out. We’ve all talked about how the flume is our Achilles Heal and if we don’t have this cleared out, at least for a portion of it, we’re in really deep trouble. It is neat to see a collaborative effort with all the groups getting together to get this started and underway.”

Speaking about the fire protection element, T.U.D. General Manager Tom Haglund added, “It is absolutely critical. Our single largest risk in the Tuolumne Utilities District is fire taking out the flume. If the flume were taken out, it could be 500 days or longer before it could be rebuilt, and the water consumption would be dropped to around 20 gallons per day, per connection.”

The project area covers 700 acres and it is expected to continue through August, so anyone recreating around Lyons Reservoir should keep an eye out for signs detailing where the work is taking place, and use extra caution.