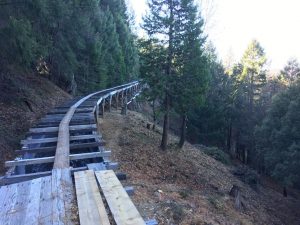 We reported yesterday that the Sierra Nevada Conservancy voted to allocate $496,000 to construct a fuel break that will increase the canal’s resiliency to wildfire. The Tuolumne Main Canal consists of a series of historic wooden flumes and connected canals that is the primary drinking water conveyance system for T.U.D. and 90% of the residents of Tuolumne County.  The canal serves a population of about 44,000, and if it was taken out by wildfire, those customers could be without drinking water for over a month.

T.U.D. Spokesperson Lisa Westbrook says, “The district is thrilled to hear that we will receive the funding. It’s such an amazing project, and really this project could not have gone through without all of the partners that have helped us with this application, including the Stanislaus National Forest, PG&E, Sierra Pacific Industries and the Highway 108 Fire Safe Council.”

T.U.D. reports that the project area includes 733 acres of multiple ownership forestland within the Stanislaus River watershed stretching between Lyons Reservoir and the community of Twain Harte.

Tom Haglund, T.U.D. General Manager, adds, “Our Board of Directors identified fire protection for the water flume system as a high priority during a strategic planning and annual goal setting session in March. When the district looked at the grant application offered through the Sierra Nevada Conservancy’s Proposition 1 Watershed Improvement Program, we thought this would be an ideal opportunity to seek grant funding for a fuel break project along the Tuolumne Main Canal. The flume and ditch system originating at Lyons Reservoir are susceptible to wildfire. This grant will help to greatly reduce the threat of wildfire to this area.”

The referenced Proposition 1, in which funding is orinating from, is the $7.5-billion water bond approved by state voters in 2014.

Work on the fuel reduction project could begin as early as March of next year.