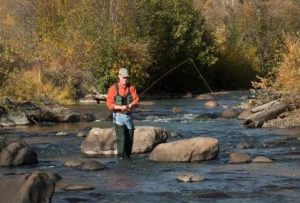 Sacramento, CA — The California Senate has passed a bill aimed at boosting the sale of fishing licenses in the state.

SB-187 would make fishing licenses valid for 12 months from the time of purchase. Currently, a license is only good until the end of the calendar year, regardless of whether it is purchased in January or December. The legislation has been pushed by Mother Lode Republican Senator Tom Berryhill over the past several sessions, but it has always fallen short of needed support. Berryhill recently told Clarke Broadcasting, “They have done this in places like Utah and Arizona, and they have actually increased their sales of licenses because of it. We’re working on it, and trying to get this thing through. We’re closer, and we seem to get some baby steps every year. I’d love before I leave, which is next year, to get it to the governor’s desk and signed.”

Berryhill says the change could help both outdoor tourism and state revenues. He notes that in 1980, when licenses were $5, California annually issued more than 2.2 million.  Today, the base price for a fishing license has increased to $47.01, while the number of annual licenses sold has decreased by 55-percent.

The bill now moves to the Assembly for consideration, and if approved there will go to Governor Jerry Brown.