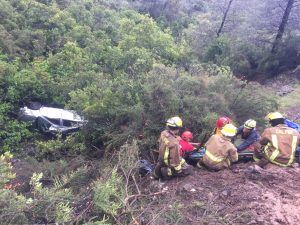 Coulterville, CA – Emergency crews scaled down a nearly 1,000 foot embankment to rescue a man with a broken leg after a crash on Friday morning.

Four tree workers, who were staying in Sonora while working to clear dead trees in the area, were returning from a safety meeting in the Coulterville area on Highway 49 when the wreck happened around 11 a.m.

Sonora Unit CHP spokesperson Faustino Pulido reports that due to an unsafe speed during a heavy down pour, the driver, 28-year old Ricardo Gonzalez heading southbound lost control of a 2004 Toyota Camry and flew off a cliff. The vehicle overturned several times, rolling down the hillside. It came to rest 800 feet down the hillside on the driver’s side of vehicle.

Gonzalez and passengers, 30-year-old Walter Menendez and 27-year-old Jose A. Cortez were able to free themselves from the wreckage and walk up the hill.  33-year-old Jaime Vidalez was trapped in the car with a broken leg. Once on the scene, a Mariposa Search and rescue crew used ropes to climb down to reach Vidalez, who had been able to get out of the car and was found about 30 feet from the vehicle.

Menendez and Cortez sustained moderate head injuries while Gonzalez suffered minor injuries.  All four were from other states that included Texas, Washington, and New Jersey, according to Pulido.