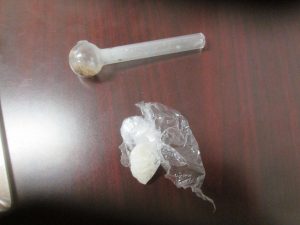 Jamestown, CA — A deputy ran a vehicle’s plate early Wednesday morning and discovered its registration was suspended — prompting a traffic stop in Jamestown that resulted in a drug bust.

Tuolumne County Sheriff’s officials report a deputy pulled over a 2001 Saturn just after 2 a.m. Wednesday in the 18000 block of Highway 108 in Jamestown. A records check was made on the four occupants. The driver, 34-year-old Christopher Weber of Modesto, had a suspended license and was on probation out of Stanislaus County. A search was made of Weber, the car and a purse belonging to 23-year-old passenger Danielle Swift. It turned up two baggies of methamphetamine, a hypodermic needle and ten plastic baggies.

The two were arrested and taken to the Tuolumne County Jail. While being booked, Swift admitted she had a glass smoking pipe hidden in her bra and a baggie of meth in her rear pants pocket.

The total meth found amounted to around three grams, according to sheriff’s officials.