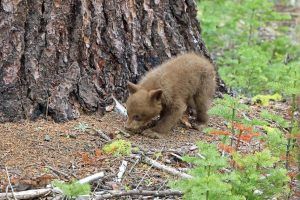 Park officials announced today that the new Bear Tracker site is a first for the National Park Service. Meant to be used as a way to help teach the public about ways to help better understand, appreciate and save bears from human-caused harms, it features information, still and video imagery — and ways to track where monitored bears fitted with GPS tracking devices have been traveling in Yosemite.

It is estimated that between 300 and 500 American black bears live on Yosemite National Park lands. Despite their name, most are actually brown in color. Along with being incredibly strong, curious and intelligent, rangers describe them as being fast sprinters, agile climbers, excellent swimmers and quick learners with an extraordinary sense of smell — and a huge appetite. Size-wise, a female bear might weigh 150 pounds; males often twice as much.

While the average lifespan in the wild is about 18 years, park visitors have the ability to shorten that by not properly storing their provisions, which teaches the bears to associate humans with food, after which they may become too dangerous to manage. Another huge concern is distracted drivers causing vehicle collisions with bears, many of which turn out fatal to the animals.