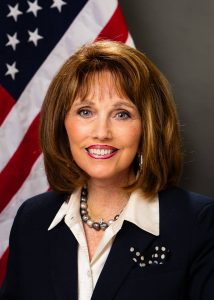 Outgoing GOP leader Jean Fuller of Bakersfield will term out of office next year and has decided to step down from the leadership role.

Bates says she is honored to receive the vote of confidence among her fellow Republicans, and notes, “It is no secret that Republicans face a challenging political environment in California. But Republicans embrace taxpayers who want a more efficient government, parents who want better schools and safer streets, and citizens who want their constitutional freedoms protected. That is a Republican Party that can attract broad support in California.”

Speaking about the outgoing Senate leader, Bates adds, “Senator Fuller’s lasting legacy on our caucus was her ability to bring us all together for the common good. During her tenure, she demonstrated a deep passion to provide all Californians with an opportunity for a brighter future. I look forward to learning from her during the transition period to ensure that the voices of the 13 million Californians that we represent as a caucus continue to be heard in the Senate.”

Senator Fuller was the first female to serve as Senate Republican Leader in the California Legislature. She served two terms in the Assembly and is finishing her final years of her second term as a Senator.

The Mother Lode is represented in the California Senate by Tom Berryhill.