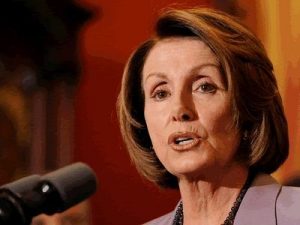 Pelosi was Tuesday’s KVML “Newsmaker of the Day”. Here are her words:

“On January 20th, our nation witnessed the peaceful transfer of power with the inauguration of a new president. The next morning, America awakened to a peaceful show of power of millions of women, and men, across the country – and indeed across the world.

Congratulations to the courageous organizers of the Women’s March – who enabled women and their families to demonstrate our values, our unity, and our good spirit – in crowds that dwarfed the inaugural turnout.

The actions of the Administration and Congressional Republicans following the march were swift and nasty. The President reinstated an international gag rule that silences even the discussion of women’s reproductive choices. And House Republicans passed an expanded and even more dangerous version of the Hyde Amendment.

The week of the inauguration though, we also observed Martin Luther King Day. Dr. King always challenged Americans to recognize the connection between the ballot, legislation and their lives.

This week starkly demonstrated that connection. Women have marched for progress. Now they must run for office. Nothing is more wholesome to government and politics than the increased participation of women.

Last weekend, one of the reasons women marched was to protect the health care of the American people. Sadly, Republicans, instead of focusing on raising wages and creating jobs – their first actions this year moved to repeal the Affordable Care Act, planning to slash and burn Medicaid, and to destroy the sacred Medicare guarantee that has protected generations of seniors – unleashing the long-standing Republican plan to let Medicare ‘wither on the vine.’

The Affordable Care Act has made immense progress in each of the goals it set forth: improving quality of care, expanding access and lowering cost. The Republicans’ plan won’t make America great again. It will Make America Sick Again.

The facts are these. The Congressional Budget Office – whose Director was appointed by a Republican Speaker – has documented the dire consequences of repealing the ACA: The number of uninsured Americans will increase by 18 million in the first year alone, surging to 32 million by 2026. The costs of premiums for Americans in the individual market will double in the same time, with the repeal of the Affordable Care Act.

Protecting the Affordable Care Act is not just about the 20 million newly insured Americans. It’s also about the more than 150 million Americans with insurance through their workplace, who under the ACA, cannot be denied coverage for pre-existing conditions, who are now protected from lifetime limits on care, whose children can now stay on their parents’ policy until age 26, who cannot be charged more because of their gender – because being a woman is no longer a pre-existing condition.

It’s about fighting for children like Zoe Madison Lihn – born with a severe congenital heart defect in May of 2010. She faced her first – of three open heart surgeries – at 15 hours old – and by six months old, Zoe was halfway to the lifetime limit her insurer placed on her care. Without the ACA, Zoe and her family faced a harrowing future; not only using up all her lifetime health coverage before preschool, but carrying the burden of a pre-existing condition. Thanks to the Affordable Care Act, Zoe is protected. Her family can have confidence in her future.

Tragically, repeal of the Affordable Care Act will lead to death, disability and suffering. And Republicans will do all of this to give a massive new tax break to the wealthiest – as they abandon seniors and working families across America.

Democrats will stand our ground to protect the Affordable Care Act, because – as we, and many marchers believe – health care is the right of every American – not just the privileged few.

Thank you. God bless you. And God bless America.”