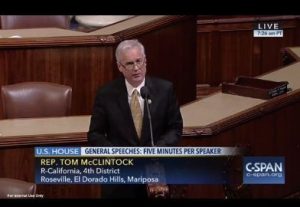 Washington D.C. — Congressman Tom McClintock says it is “Time to get serious about a balanced budget amendment.” Specifically House Joint Resolution 12. Last week McClintock reintroduced the resolution and spoke on the House floor. His full remarks are posted in his Blog here.

The resolution proposes the constitution be amended to state “The United States government may not increase its debt except for a specific purpose by law adopted by three-fourths of the membership of both Houses of Congress.” Noting the Congressional Budget Office warns within six years interest payments on the debt will exceed the current defense budget.

The amendment would take effect ten years from ratification, McClintock says this will “give the government time to put its affairs in order and thereafter naturally require future Congresses to maintain both a balanced budget and a prudent reserve to accommodate fluctuations of revenues and routine contingencies.” Congressman McClintock describes the current situation in congress as having to “define fiscal years, outlays, expenditures, revenues, emergencies, triggers, sequestrations and on and on.”