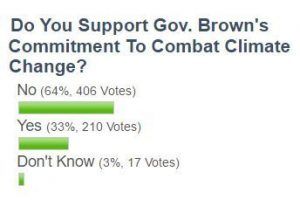 Two new informal MyMotherLode polls reflect November polls in support of President-elect Donald Trump. The most recent poll question asks “Do You Support Gov. Brown’s Commitment To Combat Climate Change?” No received 64 percent of over 600 votes in just 1.5 days, Yes had 33 percent and Don’t Know received just 3 percent of the votes. As reported in yesterday’s KVML “Newsmaker of the Day” titled “Brown Calls Out Trump Over Climate Change” Gov. Brown reportedly set the stage for what could be contentious months between California state leaders and the federal government. During a 20 minute speech Gov. Brown stated President-Elect Trump’s budget cuts could eliminate programs like earth-observing satellite programs and said, “If Trump turns off the satellite, California will launch its own damn satellite.”

Back in November two Trump related polls confirm support for Trump. The question “Do You Agree With President-elect Donald Trump’s Announced Administration Choices So Far?” received 46 percent Yes, and an additional 14 percent said Yes, they support some of his nominees, while 22 percent voted they did not support any of the nominations and another 11 percent didn’t like most of Trump’s nominations.

There is also optimism about the economy under the Trump Presidency. A November informal MyMotherLode poll asked “Do you think the economy will improve during President Trump’s term in office?” With 63 percent voting yes, 28 percent voting No and 9 percent Don’t Know.