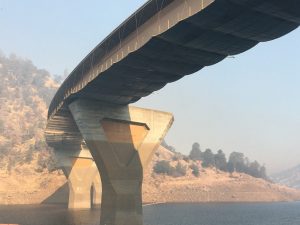 Groveland, CA — A “safe span” is allowing boaters smooth sailing under the James E. Roberts Bridge on Highway 120 near Groveland where restrictions had been in place.

As reported here in August, floating booms were put across the waterway to leave only a narrow path for vessels due to safety concerns as Caltrans is making upgrades to the bridge. However, Don Pedro Recreation Agency Divisions Manager David Jigour indicates that the booms were removed about a month ago with the safe span structure completion under the entire bridge. A picture of the span is in the upper left-hand image box. Jigours states, “The safety span is there to catch any falling debris and keep workers from falling or the occasional escape tool that might fall down. That’s why we had the booms there to keep boaters from under were they were working.”

Above motorists have been dealing with Caltrans shutting down the bridge overnights from Sunday through Thursday and one-way traffic delays during the daytime lasting to up to 20 minutes.  Jigour adds this is not the end of the booms, “They’re [crews] going to be taking out the existing concrete decking and replacing that. Once all the construction work is done on the bridge then they will be removing that safe span structure. When they remove that structure then the booms will go back around the bridge.”

Reinstalling the booms will once again restrict boaters to only a small lane to sail through. The $21 million dollar project is slated to be completed sometime in the fall of 2017.