GOP Address: Obamacare Is Not Working 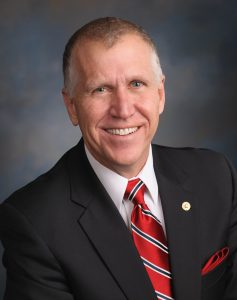 Senator Thom Tillis was Tuesday’s KVML “Newsmaker of the Day”. Here are his words:

“Hi, I’m Thom Tillis, and I’m proud to be a Senator from the great state of North Carolina.

Earlier this week, we heard President Obama deliver a speech to update the American people on his health care law, Obamacare. Rather than admit Obamacare isn’t working, the president painted a rosy picture that doesn’t match the reality experienced by millions of Americans. It’s certainly not what we’re seeing here in North Carolina with the latest wave of premium increases and policy cancellations. Even President Bill Clinton had to admit that the consequences of Obamacare are, in his words, “the craziest thing in the world.”

Just a few years ago, President Obama repeatedly promised families that they would be able to keep their health care plans if they liked them. We all know that wasn’t true, as millions of Americans received cancellation notices, forcing them to pick a new plan and in many cases a new doctor. He also promised that Obamacare would lower insurance premiums by some $2,500 a year. Instead, the premiums have increased by an average of nearly $5,000 a year since before the law was enacted. I agree with President Bill Clinton, the reality of Obamacare is the craziest thing in the world.

Since I became a Senator in 2015, my office has been inundated by countless letters, emails, and calls from North Carolinians telling us how Obamacare has been a nightmare for them and their families.

One such letter came from a couple who are life-long small business owners and they’re ready to retire. They explained to me that this year, their premium under Obamacare jumped to $1,400 a month, forcing them to forgo health insurance all together for the first time in their lives.

I received another letter from a father of a family of four. He and his wife both work full-time and they’re already gone through their entire savings to make ends meet during this Great Recession. He’s seen his family’s premiums go up [from] $600 a month before Obamacare was signed into law [to] $1,700 a month this year.

These stories are heartbreaking, the tragedy is how common they are in communities across North Carolina. Many families haven’t seen the worst of Obamacare yet. Unfortunately right now, at least 1.4 million Americans – including more than a quarter of a million North Carolinians – are receiving cancellation notices informing them that they will lose the healthcare plans they purchased under Obamacare. That’s a consequence of insurers dropping out of the program at an alarming rate.

In North Carolina, there is now one – just one – insurer left on the Obamacare exchange in 95 out of 100 of our counties. To make matters worse, those same North Carolina families will also be hit with a nearly 25 percent premium increase hike next year.

Unfortunately, instead of working across the aisle to fix this mess, President Obama and congressional Democrats are in denial. In fact, they’re doubling-down on their support for this failed law. Their solution is a so-called public option, which will eventually lead to a single-payer, government-run system that would put your family’s health care in the control of unelected bureaucrats in Washington. In other words, their solution to a failed government plan, is more government plans!

Republicans in Congress have taken a much different approach. We’ve been listening to the frustration felt by the American people.

Led by members like North Carolina Senator Richard Burr, we’re pursuing common sense reforms to replace Obamacare. Reforms that put health care decisions back into the hands of patients and doctors. Our reforms will allow for families to get the insurance coverage that meets their needs.

Patient-centered reforms, like Richard Burr’s, would lower health costs while helping protect Americans with preexisting conditions, without the need for costly government mandates. Americans have a stark choice to make to determine the future of health care in our country.

We can continue down the path created by President Obama and expand Obamacare, leading to fewer choices, and even higher premiums and deductibles. Or we can address what we already know: Obamacare is broken. So let’s instead implement a commonsense solution that will result in higher quality healthcare, more choices, and lower costs.

The heartaches of Obamacare don’t have to be the norm. There’s a better way to improve and modernize our nation’s health care system, and only Republicans are offering that alternative.

Thank you for your time, and may God bless you and continue to bless the United States of America”