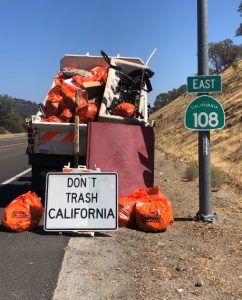 Tuolumne County, CA — Although Caltrans has named the project California’s Coastal Cleanup Day, inland crews did a little tidying up themselves yesterday.

Caltrans holds its “Litter Cleanup Day” in May every year. This year, District 10 crews hauled away 1,627 bags of litter from state roadways or 240 cubic yards. The roadways cleaned in the Mother Lode included Highway 108 through Sonora and Highway 88 through Amador and Alpine counties, as detailed here.