A Different Type Of Traffic Hazard 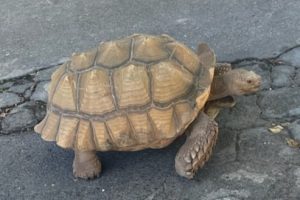 Officer Geraurd with the San Andreas CHP Unit responded to a call about a “citizen” of Calaveras County impeding traffic on Highway 49. According to CHP officials, once on scene, she encountered a dilemma, as she found the “citizen” refusing to walk on the road’s shoulder, forcing her to take them into custody for their own safety. The “citizen” also remained tight-lipped and would not answer any questions, with Officer Gerard noting that they “appeared to be a real hardened criminal.”

The suspect was hardened because it was no human breaking the law, but the large shelled turtle, shown in the image box, that stopped traffic. The officer put the detainee in the back of her patrol vehicle and headed straight to Calaveras County Animal Services, where the reptile was reunited with its family.

And it is not just tortoises that have been rescued recently by CHP officers; last month another San Andreas officer helped save some overheated felines, as detailed here.