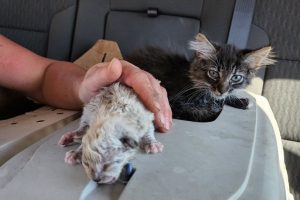 Calaveras County, CA — A CHP officer came to the rescue of a cat and kittens baking in a vehicle as temps reached triple digits.

The CHP called it “a purrfect save” by officer Cooper, who has been with the San Andreas unit for three years. He was on patrol northbound on Highway 49 yesterday afternoon, between Angels Camp and San Andreas, when he saw a vehicle on the side of the road and a woman walking away from it.

Officer Cooper flagged down the woman and pulled over to help. The car was overheated, and it turns out, so were a cat and five kittens inside, as can be seen in the pictures in the image box. A quick-thinking officer, Cooper, moved all the occupants to his patrol car to cool down while they waited for a tow truck. The chilled group then jumped into the tow truck and headed down the highway.