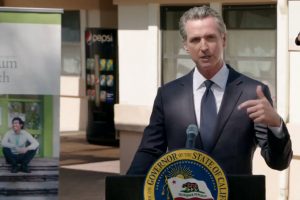 Sonora, CA – Trying to tackle the more than 100,000 people living on the streets in California, today Gov. Gavin Newsom signed the Community Assistance, Recovery and Empowerment Act, otherwise known as the CARE Court into law.

As reported earlier here, the law allows family members, first responders, and others to ask a judge to draw up a treatment plan for someone diagnosed with certain disorders, including schizophrenia. Those who refuse could be placed under a conservatorship and ordered to comply. Tuolumne County was chosen along with six other counties to establish the first programs by Oct. 1 of next year. The other counties are Glenn, Orange, Riverside, San Diego, San Francisco, and Stanislaus. All other counties would have until Dec. 1, 2024, to do the same.

The law Newsom signed on Wednesday would let a court order a treatment plan for up to one year, which could be extended for a second year. The plan could include medication, therapy and housing, which would help ease the homeless crisis in the state. California has funneled billions of dollars to city and county governments to try to handle the problem for decades, including $9 billion last year and another $4.8 billion this year. Despite those efforts, homelessness remains one of the state’s most pressing and visible issues.

“Continue to do what you’ve done, and you get what you got. And look what we’ve got. It’s unacceptable,” Newsom said Wednesday before signing the law. “This (law) has been architected completely differently than anything you’ve seen in the state of California, arguably in the last century.”

Civil liberties groups argue the new program will violate civil rights and that a person needs to want to get help for it to work. The Newsom administration estimates about 12,000 people could get help under the program. All of the state’s 58 counties are required to set up special courts to handle these cases. Those failing to participate could be fined up to $1,000 per day.