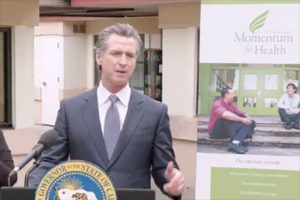 Newsom’s proposal involves creating mental health courts in every county, allowing treatment for more homeless people with severe mental health and addiction disorders. It also would compel some into care, a move that many homeless advocates oppose as a violation of civil rights.

Countering those concerns at a press conference, the Governor stressed that he has no intention of rounding people up and locking them away. Instead, he said his plan would offer a way for people to get court-ordered psychiatric treatment, medication and housing, preferably before they are arrested.

“There’s no compassion stepping over people in the streets and sidewalks,” stated Newsom. “We could hold hands, have a candlelight vigil, talk about the way the world should be, or we could take some damn responsibility to implement our ideas and that’s what we’re doing differently here.”

California’s Health and Human Services Agency Secretary Dr. Mark Ghaly suggests that the plan could apply to an estimated 7,000 to 12,000 people.

CARE Courts would have to set up a mental health branch in civil court and provide comprehensive and community-based treatment to those suffering from debilitating psychosis. If approved, they would be obligated to accept the care or risk criminal charges, if those are pending, and if not, they would be subject to being held in psychiatric programs involuntarily or lengthier conservatorships in which the court appoints a person to make health decisions for someone who cannot.

The governor advised that people would have a say in their treatment plan and have a public defender to represent them. A noted improvement, said Newsom, is that the proposal also allows a broader array of people, including a family member or first responder, to refer the person for help. Care could last up to 24 months. However, that idea did not sit well with some civil rights groups like the ACLU, which argue locking people up and drugging them against their will does not solve the problem. Another group in opposition is the California State Association of Counties which objects to the requirements put on counties.

It was not immediately clear how much the program could cost.  Last year, the Legislature approved $12 billion for new housing and treatment beds for the homeless, and this year Newsom has proposed an additional $2 billion, primarily to shelter people suffering from psychosis, schizophrenia and other behavioral health disorders.