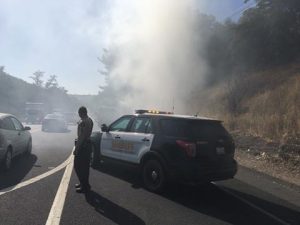 Update at 5 p.m.: Cal Fire spokesperson Lindy Shoff reports the fire is contained at just under a half acre and one engine will remain on seen for about an half hour mopping up. She adds there has been no determination regarding what sparked the blaze.

Update at 4:40 p.m.:  Cal Fire reports firefighters and Columbia Air resources have stopped the forward rate of spread of a vegetation fire off Highway 108 at about a half acre. Initially, Cal Fire located the flames near the Woods Creek Mobile Home Park and Wigwam Road, but later changed it to Golf Links Road. Cal Fire spokesperson Lindy Shoff reports, “They have a hose around the fire. Currently, there are four engines on scene. They [fire investigators] are out investigating what sparked the blaze but all aircraft has been released back to Columbia.”

Additionally, another vegetation fire sparked at the same time off Stockton Road in Sonora was put out by a Tuolumne County Sheriff’s Deputy at just a spot fire, according to Cal Fire.

Original post at 4:13 p.m.: Sonora, CA — Firefighters and Columbia Air resources are responding to a reported vegetation fire off Highway 108 near the Woods Creek Mobile Home Park and Wigwam Road. There are also reports of a vegetation fire along Stockton Road. There is no information on either fire’s size, rate of spread or whether any structures are threatened. We will bring you more details as soon as they come into the newsroom.