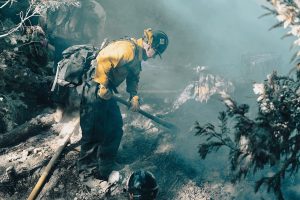 Pinecrest, CA – The acreage did not grow overnight in the Dodge Fire burning southeast of Pinecrest Lake in the Stanislaus National Forest, and one local fire unit that assisted in battling the blaze reports an escaped campfire as the cause.

The fire broke out on Thursday afternoon in the area of Crabtree and Dodge Ridge roads, and another six spot fires were sparked inside the fires within the initial fire, as reported here. This morning, the fire remains at an estimated 1.8 acres and all containment lines are holding, according to forest spokesperson Ben Cossel. He tells Clarke Broadcasting this morning that there is still smoke in the interior and resources have mopped up 15 feet within the fire’s footprint. He added, “All resources are off the line and are returning to quarters. E333, Crew1, WT242, E314, and Crew81 will be returning tomorrow [Sunday] at 6 a.m.”

When the fire first ignited, Clarke Broadcasting detailed that there were reports that the fire was the result of an escaped campfire. One of the local crews called to assist in battling the fire was from the Mi-Wuk Sugar Pine Fire Protection District. In a social media post, the district stated, “It [Dodge Fire] consisted of a group of small fires that originated from an escaped campfire. Please remember to be fire smart when camping. Fuels are very dry and receptive this time of year.”

Cossel did not confirm that as the ignition and noted the fire’s cause remains under investigation.