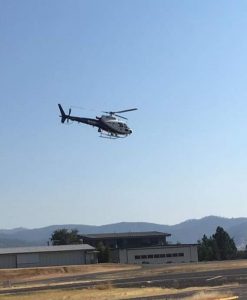 Sonora, CA — Tuolumne County Search and Rescue officials were dispatched Saturday morning after getting a report that a river guide became trapped under a tree during an adventure along the Tuolumne River.

There were 20 people in the rafting group, and five were hit by the tree while camping, according to officials. They heard the tree starting to snap and thankfully moved just in the nick of time to avoid serious injuries. It was in the area of Driftwood along the Tuolumne River. The Sheriff’s Office received an initial report that one of the guides had been trapped underneath the tree, but thankfully there were no significant injuries, just some scratches and bruises.

The call regarding the incident came in early Saturday morning and initially a helicopter was flown to the area for assistance (see photo).