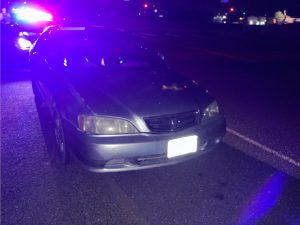 Scene of arrest on Mono Way near Peaceful Oak Road

East Sonora, CA – A Sonora woman tried to pass herself off as someone else and landed in more hot water.

A vehicle on Mono Way near Peaceful Oak Road was pulled over by a Tuolumne County Sheriff’s Deputy at around 1 a.m. on Wednesday for having an expired and suspended registration. The woman behind the wheel, 37-year-old Christina Archer, gave the deputy a driver’s license for another woman, according to sheriff’s officials, who added that it did not fool the deputy, who “noticed something was off.” A records check showed an outstanding misdemeanor and a felony warrant for her arrest.

The deputy then searched the vehicle and turned up bank cards belonging to several different people, a small bag of methamphetamine, a small amount of heroin, and drug use paraphernalia. A quick call to one of the card owners revealed the card had been stolen and used.