Merced Man Arrested For Suspicion of Arson In Amador County 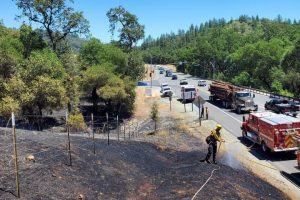 Sonora, CA – A Merced man was arrested on Sunday by Cal Fire law enforcement officers suspected of arson in connection with a fire in Amador County.

CAL Fire reports that, with the help of the Merced Police Department, 31-year-old Michael Bradley Mincer was taken into custody in Merced on suspicion of igniting the Dalton Fire in the Jackson area of Amador County.

On July 21, air and ground resources along with law enforcement responded to a suspicious vegetation fire outside of the Jackson Rancheria Casino Resort, near Highway 88 and Dalton Road in Jackson, which was contained quickly to about three acres. No injuries were reported and no structures were damaged in the blaze. After an investigation, it was determined the fire was intentionally set.

CAL FIRE Law Enforcement has arrested 108 arson suspects from the beginning of the year until the end of July. To report suspicious fire activity, call 1-800-468-4408.

Of note, this is the second arson arrest for a fire in the area of Highway 88 and Dalton Road in Jackson, as another man was accused of setting a fire in that area in September of last year, as reported here.