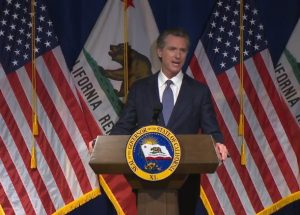 Sacramento, CA – Lawmakers are hashing out how to spend $19.3 billion set aside for climate change in the state budget, and Gov. Gavin Newsom knows exactly how he thinks the money should be spent.

The proposal would be part of the state’s $300 billion state budget. Newsom wants to speed up the state’s transition to non-carbon electricity sources and accelerate its timeline for lowering greenhouse gas emissions. Newsom’s latest proposal to legislators is to establish a permitting policy for projects that would remove carbon dioxide from the air, make the state’s 2045 carbon neutrality goal a new law, and put a ban on new oil wells within 3,200 feet of homes and schools.

“The ambition of California’s climate goals must match the urgency and scale of the climate crisis,” the Newsom administration wrote to state lawmakers in a document obtained by The Associated Press. “Increasing ambition in the near-term supports the unprecedented rate of transformation needed in this decade to build the clean energy systems of tomorrow.”

Brian Dahle, a Republican state senator and one of Newsom’s challengers for governor in the November election, calls the governor’s plan misplaced and says instead the state should be spending money to thin overgrown forests to prevent wildfires that release lots of carbon into the atmosphere.

“Put everything on the table and let’s reduce carbon,” he said. “He’s going to set a goal and (the Legislature) are probably going to pass that goal, and he’s going to take a victory lap and say `I’ve saved everybody in the world’ and nothing has changed.”

The current requirements are for the state to make sure its greenhouse gas emissions are 40% less than 1990 levels by the year 2030. Newsom also wants to change that to a 55% reduction. Newsom and state legislative leaders have until the end of August to reach a deal.