A Disabled Vehicle Led To A Burson Drug Bust 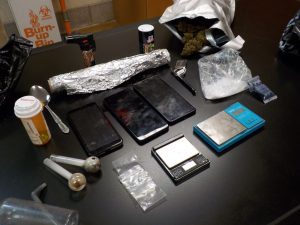 Burson, CA — A large amount of meth and pot were found in a disabled Chevy SUV and the female driver was handcuffed and placed on $90,000 bail.

A woman and a man were underneath the hood of the vehicle around 12:40 p.m. at a Burson gas station Thursday when Calaveras Sheriff’s Deputies pulled over to help. Immediately, they noticed the SUV’s registration tag had expired. While speaking with the pair, an employee of the station told deputies that the woman, 44-year-old Maria Aguilera from Stockton, had allegedly shoplifted swim shoes.

During questioning, Aguilera admitted to the theft, and the shoes were found in the SUV and returned. A record check revealed she had an outstanding arrest warrant out of San Joaquin County. A further search of the vehicle turned up 34 grams of methamphetamine, 326 grams of marijuana, 3 smoking pipes, prescription pills, and narcotics sales items.  Aguilera was taken into custody without incident. The man was released at the scene and the vehicle was towed.

Before deputies left the scene a nearby resident approached them and reported that they saw the suspect’s vehicle possibly trespassing at a property nearby. Sheriff’s officials disclosed that an investigation regarding that report is currently underway, but no further information is available at this time.