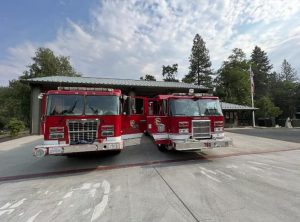 Groveland, CA — A second fire engine is now based in Groveland to help respond to an increased number of calls in the south county.

The additional engine, built in 2010, was originally stationed at the Mono Village Fire Station, and later the Jamestown Fire Station. Instead of it being transitioned to a reserve engine, the Tuolumne County Board of Supervisors agreed to spend $1-milliion in American Rescue Plan Act money to staff it, and acquire needed firefighter protective equipment, to better serve the south county area.

A statement from Tuolumne County Fire reads, “Over the last 10 years, southern Tuolumne County has had an increase in emergency responses of 39 percent, and simultaneously, responses have increased in complexity and outpaced our resources. Large development projects and increased visitors to the area have contributed to the need for a higher level of serving now and for future planning. The addition of the fire engine starting (today) August 1, 2022 will include six professional firefighters.”