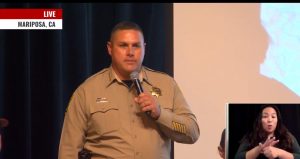 Mariposa, CA — Leaders of the Oak Fire response are beginning to transition from the fire suppression efforts to clean-up.

There has been minimal growth of the fire over recent days. Mariposa Sheriff Jeremy Briese says the entire community needs to unite during the next phase.

At a town hall meeting last night, he stated, “Now it is time to really come together, mentally and physically, to what we are going to be seeing when we open up these (evacuated) areas. Because, what many are going to be walking into, unfortunately, is what I would call total devastation.”

162 structures are completely destroyed, and it was noted that at least over 90 of those are homes.

Mariposa OES Coordinator Joe Lynch noted that a local assistance center will be opening next week at the Mariposa High School where residents can stop by and learn about the resources available.

Crews reported last night that great progress is being made in building control lines and mopping up hot spots.

Also on hand were Assemblymembers Frank Bigelow and Jim Patterson. Bigelow praised Sheriff Briese and the Mariposa County Board of Supervisors for quickly declaring a local state of emergency, which opened the door for state firefighting resources to quickly be deployed.