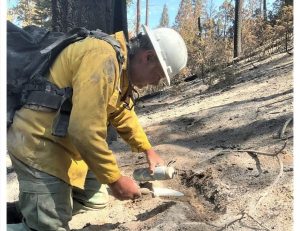 Mariposa, CA — A sign that the firefighting efforts are winding down, a Burned Area Emergency Response (BAER) team has begun its work assessing the impacts of the Washburn Fire in Mariposa County.

The fire, which ignited on July 7, and burned through parts of Yosemite National Park and the Sierra National Forest, and threatened historic giant sequoias, is 4,881 acres and there is 91 percent containment.

The Washburn Fire BAER team is led by Forest Service Soil Scientist Todd Ellsworth and National Park Service Biologist Chris Holbeck. The team will evaluate the burn area and identify watersheds that have increased potential for post-fire flooding, sediment flows and rockslides ahead of the wet fall and winter months. Officials will then use the data to determine if any preventative actions are needed.

BAER teams use satellite imagery to produce a runoff map predicting water flows during the storm season. The team is comprised of hydrologists, geologists, road engineers, botanists, archeologists, and others. The BAER team work commenced this week.

The BAER team findings will be publicly released as reports are finalized over the coming months.

The work is taking place as officials still work to contain the nearby Oak Fire, which is over 18,500 acres and also in Mariposa County.