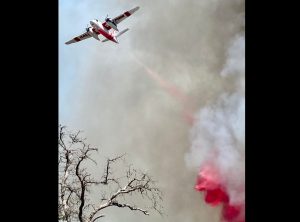 Jamestown, CA — CAL Fire reports this morning that the Slate Fire that ignited yesterday afternoon near Jamestown is 50 percent contained and holding at around 64 acres.

The fire ignited late in the two o’clock hour Thursday in an area between Hurst Ranch and Chicken Ranch Road, on the south side of Highway 108. There were some road closures and evacuation orders nearby, which were later lifted during the five o’clock hour.

CAL Fire spokesperson Emily Kilgore reports that there was some damage to a section of the railroad tracks in the area, but no structures were impacted, and there were no injuries.

Crews will continue to construct and strengthen containment lines today and check for hotspots while working towards full containment. What ignited the fire remains under investigation.