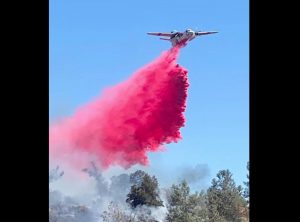 Update at 5:20 p.m.: CAL Fire crews continue to work on the Slate Fire burning in the Jamestown area of Tuolumne County, between Hurst Ranch and Chicken Ranch Road, on the south side of Highway 108. The fire is 63 acres and crews have gained 10 percent containment. All evacuation advisories have been lifted as well as the closure of Bell Mooney Road from Jacksonville Road to Highway 108. CAL Fire spokesperson Emily Kilgore reports that there was some damage to a section of the railroad tracks in the area, but no structures were involved and there were no injuries. She added that crews will continue to construct and strengthen containment lines and check for hotspots while working towards full containment into the night. What ignited the fire remains under investigation.

Update 4:40 p.m.: The fire is 10 percent contained and the forward spread has been stopped at 63 acres. CAL Fire spokesperson Emily Kilgore advises, “There are some infrastructure power lines that are still threatened.” PG&E has a crew on scene monitoring the situation and no power has been shut off. The evacuation advisories and road closure are still in place and can be viewed below. There have been no injuries or structures burned.

Update at 3:45 p.m.:  The Slate Fire is now 50 acres in size and burning south of Hwy 108 near Chicken Ranch Road in the Jamestown area of Tuolumne County. The CHP has closed Bell Mooney Road from Jacksonville Road to Highway 108. CAL Fire is asking the public to stay out of the area to allow firefighters and emergency personnel to fight this fire safely.

Additional evacuation advisories are being given for Hurst Ranch and Karlee Lane. Advisories already in place are on the south side of Highway 108 from Hurst Ranch to Bell Mooney and Jacksonville roads.

Update at 3:15 p.m.: CAL Fire is now reporting that the vegetation fire is between Hurst Ranch and Chicken Ranch Road, on the south side of Highway 108 in the Jamestown area. Spokesperson Emily Kilgore added that the fire is 30 acres in size and the flames are burning in grass and moving at a moderate rate of spread toward the southeast. It has been dubbed the “Slate Fire.”

Tuolumne County Sheriff’s spokesperson Ashley Boujikian is reporting Evacuation Advisories are being given for the south side of Highway 108 from Hurst Ranch to Bell Mooney and Jacksonville roads. An update will be provided as soon as new information comes into the newsroom.

Original post at 2:55 p.m.: Jamestown, CA — Chinese Camp, CA — Columbia air and ground resources are battling a vegetation fire along Highway 108 in Tuolumne County near the Montezuma Junction and Chinese Camp. CAL Fire spokesperson Emily Kilgore details that firefighters are at the scene of a 1-acre vegetation fire with a slow rate of spread. There is no word as to whether any structures are threatened at this time. An update will be provided as soon as new information comes into the newsroom.