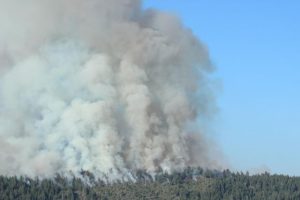 As several massive wildfires burning in the west, some are blaming drones for forced evacuations in Utah.

In the past week, three drone sightings over a raging wildfire in the state have grounded aircraft resulting in residents having to flee from 100 homes. Utah’s governor faults drones for the exodus claiming the evacuations might have been avoided if not for the drones.

The issue has prompted federal authorities to look for answers to the problem and some are pointing towards some high-tech solution for the increasingly hazardous situation that endangers airplane and helicopter pilots trying to put out blazes. One option the U.S. Interior Department is working on would enlist drone makers and mapping companies to create a smartphone system to alert drone users when flight restrictions are in effect over wildfires. The other would involve drone manufacturers installing a system that operators would activate to automatically prevent a drone from flying in restricted airspace.

Last year, there were 20 drone encroachments at wildfires, with more than half hindering firefighting efforts.