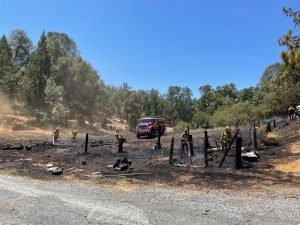 Sonora, CA — Air and ground resources have been busy responding to multiple fires that were quickly contained on this Sunday.

One of the most visible was a fire in the 15900 block of Tuolumne Road near Black Oak Road. It burned less than an acre around noontime. There were a couple of structures nearby, but no damage was reported. Mop-up is still ongoing.

Air resources from Columbia were also sent to a small quarter fire east of Oakdale shortly after 1pm in the 13000 block of Lancaster Road. It was quickly contained. Also around that time, there was a small fire reported in the area of 28 mile Road in Stanislaus County, and Columbia air resources responded.

Earlier today, before 8am, a small fire was contained by locals outside a home in the 20000 block of West Willow Springs Road in Soulsbyville. There was also a small fire, less than a quarter acre, contained this afternoon near the Pine Mountain Lake area.