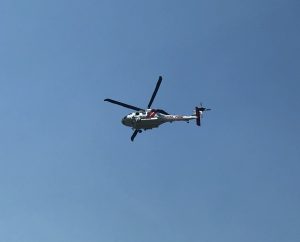 Update at 4:50 p.m.: All Columbia aircraft have returned to base as firefighters have extinguished a vegetation fire that ignited in the Wallace area near the Camanche Reservoir. The blaze started in some grass behind a home in the 11000 block of Slate Drive, off Camanche Parkway South and north of Highway 12. Everyone inside the home was able to escape unharmed and the structure was not damaged. The fire is estimated at about a half-acre in size and ground crews will remain on scene mopping up for the next hour. What ignited the fire is under investigation.

Original post at 4:20 p.m.: Calaveras County, CA — Columbia aircraft and ground crews are battling a vegetation fire behind a home in the Wallace area of Calaveras County.

The flames ignited in some grass at the back of a property in the 11000 block of Slate Drive, off Camanche Parkway South on the southeast side of the Camanche Reservoir and north of Highway 12. CAL Fire reports that the blaze is about a half acre in size. They add that all the occupants have been evacuated from the home. No other structures are threatened at this time. An update will be provided as soon as new information comes into the newsroom.