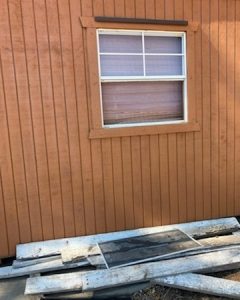 Sonora, CA– On Thursday at close to 9:30 AM Tuolumne County Sheriff Deputies responded to a report of a burglary in progress at a residence near the area of Cordelia Road and Mono Way in Sonora. The resident reported a male was inside a shed on his property. As deputies arrived they saw a suspect that fit the description running into the bushes nearby. Deputies chased and caught him a short distance away. The male, 37-year-old Kenneth Eldred was handcuffed and detained while the deputies started their investigation.

Deputies spoke to the resident who made the initial call, he went outside to retrieve a tool when he noticed a chain, bolt, and window on his shed appeared out of place. The resident reported hearing banging and walking coming from the shed, so he called 911. Shortly after the call to 911, Eldred exited the shed through the window and the resident chased Eldred off the property while updating dispatch. Eldred damaged a fence on the property as he fled, Further investigation found Eldred had removed the window of the shed to gain access, had cut a padlock, and had been stacking items from the shed near the window.

Eldred was arrested and transported to the Dambacher Detention Center where he was booked on multiple charges including burglary, vandalism, obstructing and resisting a peace officer, and a misdemeanor warrant.