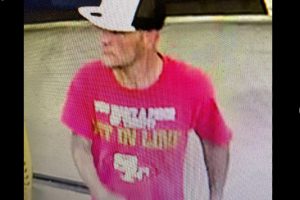 Columbia, CA — Check out this security camera photo of the suspected bicycle thief in the image box and if you recognize the man, call Tuolumne County Sheriff’s officials.

The bike is electric, and investigators say it is worth more than $1,000. It was taken from outside the Dollar General store on Parrotts Ferry Road in Columbia on Tuesday. There are reports that the bicycle has been recovered and returned to its owner.

Sheriff’s officials relay that the suspect has not been caught yet and that is why investigators are turning to the public for help in identifying the suspect. Anyone with information regarding the suspect is urged to contact the Tuolumne County Sheriff’s Office non-emergency line at 209-533-5815.