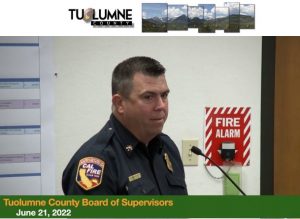 The board of supervisors this week gave a Certificate of Appreciation to Andrew Murphy for his decades of work in the fire service, including the most recent four in Tuolumne County, serving as the Assistant Chief of the Tuolumne County Fire Department, along with same role with the Groveland Community Services District Fire Department and CAL Fire Tuolumne-Calaveras Unit.

Of recent note, Chief Murphy served as the Incident Commander on the Washington Fire that threatened downtown Sonora last August. He was also the Planning Section Chief on the Moc Fire that evacuated Groveland in 2020 and the Butte Fire that went through Calaveras County in 2015.

At this week’s meeting he was praised by CAL Fire TCU Unit Chief Nick Casci for taking leadership roles on numerous projects. He added that Chief Murphy has always been committed to both the assignment at hand and the people who he is working with.

Chief Murphy has also helped the county receive millions of dollars in state grants, and helped to develop a five-year strategic plan, and a new fleet replacement plan. In addition, he established a program that helps with mental wellness for the volunteer firefighters.

He was praised by the five county board of supervisors, along with many others, like Sheriff Bill Pooley.

Chief Murphy concluded, “It has been my greatest honor working with some of the most dedicated and professional public servants over the past four years that I’ve ever worked with. They do so much with so little, and I wish the community really understood that. We have had a lot accomplished, and there is still a lot to do.”

Prior to his Tuolumne County arrival, Chief Murphy commenced his career as a volunteer firefighter with the Sheep Ranch Fire Company in 1990. During that time he attended Columbia College and received an EMT Certification. In 1991 he was hired as a seasonal firefighter at CAL Fire’s Copperopolis fire station. He also served stints with the CAL Fire Merced-Madera-Mariposa Unit, the Santa Clara Unit and the Copperopolis Fire Protection District.