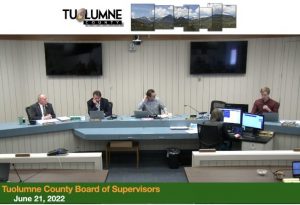 Sonora, CA — The Tuolumne County Board of Supervisors spent about an hour debating whether to approve a proclamation declaring June as LGBTQ Pride Month.

It proved to be a contentious issue at today’s meeting with members of the public both for and against. It was proposed by Supervisor Jaron Brandon who said he wants to “live in a community that loves and accepts everybody.” He added that the proclamation was important because it was the “first of its kind” in the county.

Brandon invited three local people to share stories about challenges they faced in coming out about their identity, and the related discrimination faced.

Immediately after, around a dozen people then spoke during the public comment period, both for and against the resolution. For example, both incoming Sonora City Council members weighed in from opposing sides. Member-elect Suzanne Cruz argued that this is not something the government should be getting involved with. Meanwhile, member-elect Andy Merrill called it “reprehensible” to be opposed to it.

The final vote in favor of the resolution was 4-1, with board chair Anaiah Kirk in opposition. Kirk stressed, “I support your individual liberties to pursue life, liberty, and happiness how you want, but don’t put me in the situation where I have to sign and say that I embrace it fully and that I celebrate it.”

The other four supervisors voiced support for the proclamation. District Two Supervisor Kathleen Haff stated, “We are all part of the human family. No matter how we identify, it is important to put emphasis on how we each contribute to our society. We can only do that when we feel safe and protected.”

Supervisor Ryan Campbell stated that he supports the sentiments made by those in favor, and concluded by arguing, “I think the fact that this issue is still in 2022 somehow controversial, and divisive, I think more than anything illustrates the need to have a resolution like this.”

The board chambers was packed during the discussion about the resolution, with people from both sides clapping and cheering when comments were made both for and against.