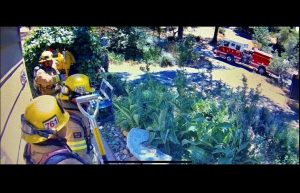 Sonroa, CA– Additional information has been released about a house fire in which a man was rescued in the 19000 block of Serrano Road in east Sonora this past week.

The Tuolumne County Fire Department reports, “On arrival firefighters found a residential structure with light smoke showing and reports of multiple dogs trapped inside. Firefighters quickly made entry to ensure all pets were out of the home.”

While searching the home for pets, officials also found an unconscious man in the bedroom where the fire was located.

The fire department reports that 80 percent of the home and its contents were salvaged, and the fire was determined to be “accidental.”