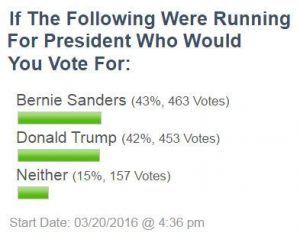 Last week’s informal poll asked if Bernie Sanders and Donald Trump were running for president who would you vote for. Sanders won by 1 percent, with 10 more votes more than Trump. The votes for ‘neither option’ were 15 percent of the total. The two candidates who are separately seeking their party’s nomination were matched up after responses to an informal myMotherLode poll putting Sanders and Trump ahead of other candidates currently running for the party nomination as detailed here.

In the newly ended informal poll “How Likely Is It That Donald Trump Will Become President?” Not likely received the most votes, 28 percent, but 26 percent thought Trump becoming the next President is ‘most likely’ in addition ‘Maybe’ got 20 percent of the votes and “it is certain” received another 12 percent. No chance received 14 percent of the votes. A similar poll is planned with the same question about Bernie Sanders and Hillary Clinton.

As reported here, the Public Policy Institute of California Poll found that Trump leads the Republican candidates among all age, education, gender and income groups. Hillary Clinton has the support of 48 percent of California Democrats and Sanders has 41 percent. The official polling was conducted March 6-15.

Currently, in order to vote in California’s Republican primary, you must be a registered member of the GOP. However, the Democrats, Libertarians and American Independent Parties allow “decline to state” voters to take part in their primaries in California. A plan to allow the same in the republican primary is detailed here.

Currently Trump has 739 Republican delegates and Ted Cruz has 465. For the Republican nomination 1,237 delegates are needed or other rules go into affect, 944 are still available.

Currently Clinton has 1,243 pledged delegates and 469 superdelegates, for a total of 1,712. Sanders has 975 pledged delegates and 29 superdelegates for a total of 1,004. For the democratic nomination 2,383 delegates are needed and 2,049 are still available. There are 12 states that will vote before California does on June 7th including New York which awards 247 delegates. Five other states have the same date for their primaries as California but California awards the majority of delegates 475, out of 694 Democratic delegates and 172 of 303 of the Republican delegates on that day in June. Both Party’s Conventions will be held in July. November 8th is the Presidential election which will assign electoral college votes. To win the 2016 presidential election a candidate must receive 270 electoral college votes.