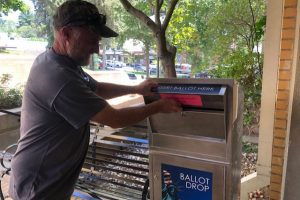 Sonora, CA – With one key race still to be decided, Tuolumne County election officials are hoping to have a new count by tomorrow afternoon.

Tuolumne County Clerk and Auditor-Controller Debi Bautista updated that out of the estimated 3,000 to 4,000 ballots left to count, the staff processed about 1500 ballots today. She added, “Clean up and organizing all the ballots from last night took up most of the morning. I’m hoping to have almost all of our ballots processed by three tomorrow [Thursday, June 9].”

Two key races are still undecided. The Superintendent of Schools race has Cathy Parker with a comfortable lead over challenger Zack Abernathy by 54-percent to 45-percent, respectively. The other is the Sonora City Council race. The top two vote-getters are Andy Merrill and Kurt Bryant. Five votes behind Bryant is the third-place candidate, Suzanne Cruz. The top two vote-getters will win the seats.

For the complete rundown of the election counts so far, including the State Senate and Congressional results, click here.