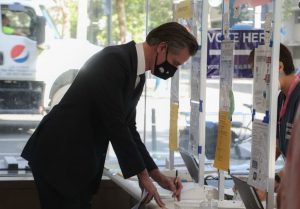 Newsom received 56-percent of the primary vote and Dahle had just under 17-percent. Independent Michael Shellenberger was a distant third with 3.7-percent. The top two vote-getters, regardless of party, move onto the November runoff.

In response to the results, Newsom, states, “Across the country, Republicans are attacking our fundamental rights as Americans. Destroying democracy, stripping a woman of the right to choose, and standing idly by as gun violence claims far too many lives. California is the antidote-leading with compassion, common sense and science, treasuring diversity, defending democracy and protecting our planet.”

Meanwhile, Dahle stated, “We are now moving forward to fight for the future. Tonight changes everything. In the coming weeks, I will give Californians a clear vision of a prosperous California. Californians are reeling from bad policies that are making it impossible to afford to live here.  People who work by the hour, or live on a fixed income are being crushed. California energy policies make everything cost more. We deserve a safe California where the laws are enforced and violent criminals are not let out early. Not building any water infrastructure for decades, forcing us to ration and skyrocketing food costs is a travesty.”